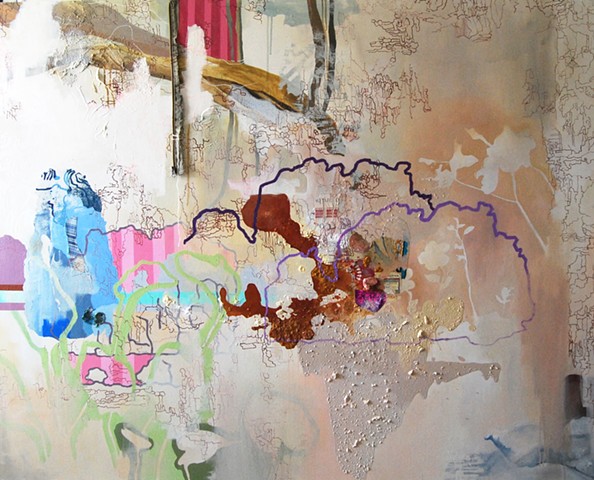 My body of work is strongly influenced by the diversity of my cultural heritage. My four grandparents are from four different, French colonies and/or territories: France, Guadeloupe, India and Vietnam. I was born and raised in Paris, France. I juxtapose visual elements from my cultural background to create a unified, imaginary, abstract world where I can find my identity. I also use my own invented script by mixing the languages that my family speaks (French, Creole, Tamil and Vietnamese). This self-created world, steeped in the diversity of my cultural roots, has become a play with the combination of traditional and non-traditional medium as well as structure versus relinquishment of control. The use of non-traditional medium has given me the flexibility to experiment with creative avenues that are unexpected. It is about chaos, breaking rules and exploring freedom. I never know what the outcome will be. Through the process I follow a rhythm that I have created unconsciously. When viewing my artwork, the observer is transported into an imaginative world where multiculturalism becomes one.